The grandmother at Zumanity

Let's talk about what happened at Vegas.

Nearly two years after moving back to India from the US, the family has decided to return for a short vacation.  When you can occasionally afford it, the 'American spring for the Indian summer' trade is one that is pretty easy to make.  What is less easy is the decision on where exactly to visit in the US.  Particularly heavy debate centered around a couple of free days on the itinerary.  The wife plumped for something kid friendly, I for Vegas.  In an increasingly rare victory for our youthful urges over parental instincts, we put our chips on the strip. 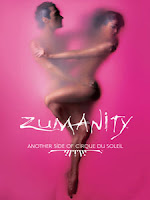 So here we are, on our kidless night in Vegas, and the show we plan to catch is Zumanity.  For those unfamiliar with it, Zumanity is an 'adult oriented' Cirque du Soleil show that runs at the New York New York hotel.  It has the familiar Cirque acrobatics and athleticism, but is spiced up with a heavy dose of Vegas style cabaret sensuality.

The turnout is big and the crowd is all dressed up in their finery.  The evening is young, the audience - less so.  After all, at $100 a pop, the show isn't exactly up your average college student's alley.  The lights dim, the pretty girls come out, and we are off.  Over the next two hours, we have act after act of extremely skillful acrobatics performed by scantily clad, universally topless women, and scantily clad, universally well endowed men - though the latter needs to be inferred, and isn't as readily verifiable as the former. 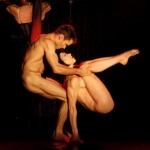 Now, needless to say, this isn't the sort of show that plays regularly at the Prithvi theater in Bombay.  The wife and I are one part thrilled at the delicious naughtiness of it all, and one part open jawed at the proceedings on stage.  But most of all, I think we are just a bit awkward, if you get the drift.  I turn to her to say something like "Wow! How did she do that??" and she returns a benevolent smile and a shake of the head that says "Yes, I am sure you were admiring the technical difficulty of that maneuver".

In the midst of this, two of the performers (needless to say, topless and well endowed respectively) call out for some audience participation.  They jump into the front rows, search around - and while I am trying desperately to avoid eye contact, they pick a woman from row three.  She says her name is Debra (or some such).  She is dressed in a baggy pair of jeans and a generously large white T-Shirt.  She looks old enough to be a grandmother a few times over, and she is blushing like a new bride.

So this hunk on stage sidles up to Debra, rubs his crotch suggestively on her hips while his nubile partner, wearing scarcely anything more than her smile, looks on with seductive encouragement.  "So Debrrra", he purrs, rolling his r's, "what do you do?"  If she was blushing before, now she is positively mortified.  Giggling uncontrollably, she hides her face in her hands, and mumbles - you can't make this stuff up - "I am a school bus driver."

The audience explodes in laughter.

And I start thinking.  Here, in vignette is a commentary on so much that is different about the American and Indian social constructs.  This setup on stage would never, ever be witnessed in India.  "Why do you say that?" asks the wife when I mention it to her after the show.  Well, let us think, I say, and we come up with the list below.

Top 10 reasons why a schoolbus driving grandmother named Debra will not be found on the stage of a risque cabaret show in India:

[Caveat:  All generalizations are false, including this one.]
And of course, the final reason why a schoolbus driving grandmother named Debra will not be found on the stage of a risque cabaret show in India -

So there you have it - the Top 10 reasons I thought of - in the process ruining a perfectly wonderful show of Zumanity for myself.  Sorry girls!  Maybe next time.

As I mentioned at the top of the list though - all generalizations are false.  Case in point - The Vagina Monologues has had an extremely successful run in Mumbai - at the aforementioned Prithvi among other places.  So maybe it isn't India that has a mental block - just my outdated image of it.
Email ThisBlogThis!Share to TwitterShare to FacebookShare to Pinterest