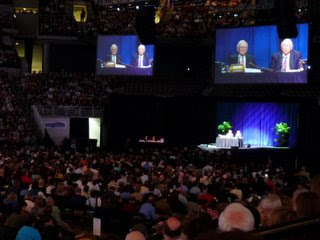 Over this weekend, I attended the annual shareholders' meeting of Berkshire Hathaway. The 'woodstock of capitalists' had its regular share of investment talk, folksy witticisms and feel-good bonhomie. As part of the five hour question and answer session during the day, Warren Buffett made a strong book recommendation. Which is what got me thinking - over the last ten years, what books has Warren Buffett recommended in these meetings?

Based on my reading of the annual reports of different years, here is a list I came up with -

2001: Jack - Straight from the gut; by Jack Welch
2002: Take on the street; by Arthur Levitt (then chairman of the SEC)
2003: Bull!; by Maggie Mahar
2003: The smartest guys in the room; by Bethany McLean and Peter Elkind
2003: In an uncertain world - Tough choices from Wall Street to Washington; by Peter Rubin
2003: (And in many other years' letters) The intelligent investor; by Benjamin Graham
This is a book that Buffett has variously called "my favorite investment book" and "the most important investment book ever written".
2004: Nuclear Terrorism - The ultimate preventable catastrophe; by Graham Allison
2005: Where are the customers' yachts?; by Fred Schwed
(which Buffett called "the funniest book ever written about investing")
At other times: (I couldn't find the specific years) Books by John Bogle, and those by Philip Fisher
2009: The great crash - 1929; by John Kenneth Galbraith

In the past, I have taken the Oracle's recommendations and have been richer for it (I mean intellectually). This year, it was The Great Crash. Stay tuned to see how that turns out.
Email ThisBlogThis!Share to TwitterShare to FacebookShare to Pinterest