The better angels of our nature: Steven Pinker vs Nassim Taleb 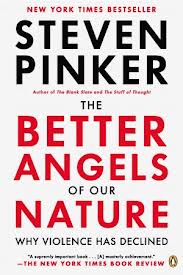 In my years of reading, there have been a handful of occasions when I have read a piece of non-fiction that has genuinely opened my eyes to a whole new way of looking at the world.  Something that can truly be called to have created a landmark in my own mental landscape.

And practically every time that happens, you can bet there will be some expert somewhere ready to rain on that parade.

The landmark in this instance (which has shaken me out of a long self-imposed silence on Brick and Rope) is Steven Pinker's masterly book The Better Angels of our Nature - one of the best books of non-fiction I have read in my lifetime.  And the 'expert' in question is Nassim Nicholas Taleb.

We tend to think of our current times as being racked with violence - all the stories of war, terrorism, gun crimes, rape and other such that dominate the news make it easy to imagine that these are really hard times.  It is easy to hanker for the 'good old days' when people lived in low tech societies without the means for mass killings, lived closer to nature, in smaller groups, where the neighbour was your friend and the grocer gave you credit.  Oh to be able to get back, you idly ache when another gory headlines lights up your screen, to those simpler times when violence didn't dominate one's life so.

Enter The Better Angels of our Nature.  Thee central thesis of the book is that violence in most forms has not increased but actually steadily and dramatically declined over time, and by most measures we live in just about the most peaceful times that mankind has ever known.  Pinker tries to demonstrate that with chart after chart of historical data on different forms of violence, and how they have trended over time - and in almost every case, things seem to move down.

Pinker's definition of 'violence' is expansive.  He is not speaking solely about wars and war-related deaths.  The book takes into scope homicides, human sacrifice, cruel and unusual punishments, slavery, genocides, lynching, corporal punishment of children, homophobic violence, violence against women, and the like.  Basically any form of violence which a citizen of the world might face during their lifetime - either from enemy states (war); their own state / society (torture, anti-gay laws, sati etc); or from their fellow citizen (homicides).  Along all of these dimensions, he makes the assertion that life in the 21st century is about the best it has been for mankind.

Pinker fills up The Better Angels of our Nature with 104 charts and tables that attempt to demonstrate each of the trends above.  Homicide rates in England, 1200-2000; capital punishment trends in the United States; 100 worst wars and atrocities in human history; deaths in wars involving the great powers, 1500-2000; global rates of death from terrorism; child abuse trends in the United States; violence by intimate partners; opinion poll trends in attitudes towards women / gays / child rearing; vegetarianism.  The brushstroke is about as broad as you can imagine.

If you are the sort that is politically neutral, and have no particular fondness for one ideology over another, and you are genuinely interested in understanding the human condition, I can't imagine how you could come out of reading Better Angels without being enlightened, moved, changed.

So now, to the criticisms.

When it was published in 2011, The Better Angels of our Nature received broad acclaim, making the Best of the Year lists at some of the publications I have most often tended to trust at Brick and Rope - the New York Times, the Economist, Guardian, and others.  But, as is to be expected of any 800 page book on the social sciences, it also received its share of criticism.  In my mind the criticisms of the book fall into three categories. 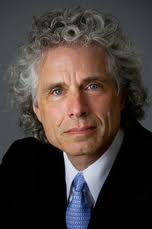 First, the no-ax-to-grind, factual criticisms.  I agree with most of these.  For one, the book is too long!  800 pages of really heavy material can be quite taxing, even for the most ardent reader.  Also, while the chapters that describe and the demonstrate the reduction in violence are gripping and superbly written, I am a little less sure of the two chapters that deal with why violence reduced.  Some arguments are easier to swallow here than others.  And importantly, the evidence isn't strong for any of these.  (It is an important tell that the 'why' chapters have the fewest tables and charts).

Second, there are the criticisms by the political left - well meaning people who have been campaigning against gun violence, large military spending, war mongering, gay bashing and the like.  These activists are doing admirable work, but their continued effectiveness depends on the notion of a world that is getting increasingly violent ("be afraid, be very afraid!").  Efforts of groups like these are almost certainly to thank for the remarkable reduction in violence we have seen over the decades - particularly in the areas of person-to-person violence (women's rights, gay rights, children's rights, animal rights etc), but also likely in the increased pacifism of democratically elected governments everywhere.  But they are in the unenviable position of not being able to accept openly that they have indeed succeeded in their last few decades - because it runs the risk of current campaigns being derailed.  In the midst of a heated debate on the most recent gun control legislation for example, the left is hardly likely to come out and endorse a work that says violence is already down by a whole lot.

There is one particular methodological criticism that this group most often levels on Pinker.  This is that Pinker's choice of metric in many of his charts is incorrect.  Over the course of history, the population of the world has steadily increased.  So wars or murders or other forms of violence today claim more absolute number of victims than those in the past.  But how can one know whether violence has trended up or down? To check this, Pinker often shows violence victims as a ratio of the relevant population at that point in time (number of deaths per 100,000 population, say).  A lot of people have questioned the legitimacy of this metric.  I, for one, am comfortable with it.  I recognize the weaknesses of the metric, but I can't see ready alternatives that can be trended over vast stretches of time.  I am willing to grant Pinker this one.

The third form of criticism leveled against The Better Angels of our Nature are of the 'statistical expert' variety. 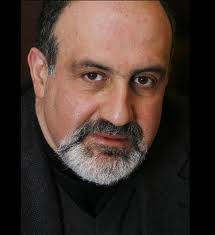 On to Nassim Taleb, and his problems.
A few months after the book came out, Mr.Taleb came out with a scathing criticism that he put up on his blog.  Pinker responded to the criticism with this own post here.

Here is my plain English translation of Taleb's major complaints with the book -
My views on all these complaints is - "yes, but so what?"  These criticisms miss the point on two major counts -

"Man's inhumanity to man has long been a subject for moralization.  With the knowledge that something has driven it down, we can also treat it as a matter of cause and effect.  Instead of asking, 'Why is there war?'we might ask, 'Why is there peace?' We can obsess not just over what we have been doing wrong, but also over what we have been doing right."

"In this final chapter, I will not try to make predictions; nor will I offer advice to politicians, police chiefs, or peacemakers, which given my qualifications would be a form of malpractice."

Before I end, allow me to indulge in a bit of ad hominem, something Taleb decries but generously serves himself from.

I loved Fooled by Randomness, but was very irritated and annoyed by The Black Swan.  (See Brick and Rope's review: The Black Swan: The improbably avoidable book of 2008).  Over the years, my view of the tough talking Mr.Taleb has not improved much.

Here is a recent Taleb interview, peddling his new book Anti-Fragility.  I reproduce below the specific part of the interview about the Pinker episode:

The Lebanese-born academic is not afraid to tear down the ivory towers, in which he himself resides. But he also displays an incredible sense of loyalty. After the 2002 New Yorker profile, of which Taleb complained that Gladwell “made me seem gloomy and I’m not gloomy,” the two writers became friends. In 2009, Gladwell told a C-SPAN interviewer that he feels an intellectual kinship with Taleb.

So, when the renowned Canadian-born Harvard psychologist Steven Pinker penned a critical review in The New York Times of fellow Canadian Malcolm Gladwell’s novel, What the Dog Saw, Taleb rushed to Gladwell’s defense. “I got furious. I feel loyalty for someone who does something nice for you, when you are nobody.” Taleb wrote a scathing critique of Pinker’s research in The Better Angels of Our Nature: Why Violence has Declined. In his critique, titled “The Pinker problem,” Taleb claims Pinker’s book is riddled with errors in sampling and doesn’t “recognize the difference between rigorous empiricism and anecdotal statements.” Pinker responded with his own paper in which he writes, “Taleb shows no signs of having read Better Angels.”

So let me get this straight Mr.Taleb -

You like Mr.A because he is "nice to you when you are a nobody".  Then you "get furious" at Mr.B because he writes a critical review of Mr.A's book.  So you go ahead and write a scathing critique of Mr.B's book.

Real mature.
Email ThisBlogThis!Share to TwitterShare to FacebookShare to Pinterest