"Re-Discovering India":  Facts about India that I either - (a) never knew, (b) never appreciated, or (c) once knew and appreciated, but have since forgotten - the distinction between the three flavors being mostly semantic.  Contemplating my eager homecoming, I find myself getting re-acquainted with these old friends.
********************************************************************************
In two days, I will pack my bags, and get on the interminably long Air India flight from New York, Mumbai bound.  At about the same time, some hundreds of billions of molecules of air and water currently residing above the Indian Ocean will decide, all at once, with dramatic suddenness and unremitting decisiveness, that they too like the warm lanes of Mumbai and heartland India better than their cold, wet, oceanic hosts.  Without so much as an Expedia search, they will set off on their long journey, these fickle winds, to keep their annual appointment with the subcontinent.  The first of these guests will arrive in Kerala around the 1st of June - dark, rumbling, and gloriously, ominously wet.  The monsoon will be here.


It was only a few days ago that I realized my arrival in Mumbai is going to coincide with that of the monsoon.  Seven years of scrupulously avoided rains had dulled my memory of them, but those faint echoes from the past were enough to cause some flutters in the present.  My first concern was for my daughter, the sheltered child who has only seen rain in sputtering, playful moods.  Even the 'thunder storms' the local weather channel warned of occasionally would be no more than a few hours of pouring rain accompanied by the periodic clap of thunder, the fitful lightning, and then a glorious rainbow.  An inconvenience, sure.  A dampener of picnic plans.  But not something to fear.  Not an angry, malevolent God.


I try to prepare her for what lies ahead.  I tell her about the rain, the unceasing wetness.  "But appa", she says with the touching certitude of a child, "if it rains, I can wear my raincoat when I go out to play!"  No my darling, you can not.  No raincoat can stand up to the fury of the monsoon.  Ask the many dispirited Duckbacks of my childhood.  Each met a monsoon, and didn't have the pleasure of meeting another.


[Quick primer on the monsoon for those who, like me, only remember enough from high school science to mumble random keywords when the topic comes up:  Super hot summers in the sub-continent and the Thar desert cause air over central and northern India to become considerably hot, and hence create low pressure.  Cooler - and hence high pressure - air from over the Indian Ocean rushes in to fill the low pressure area, carrying a load of moisture with it.  The winds are blocked by the Himalayas, rise up because of it, cooling as they rise.  Water precipitates, it rains - the southwest monsoon.  Now, why all this gets initiated suddenly on June 1 every year is beyond me, but there you have it.


Around September, the sun has moved south, the subcontinent and northern lands get cooler, the Indian Ocean air is still hot, the winds rapidly get into reverse gear and go right back.  On the way, they pick up some moisture from the Bay of Bengal, and dump it over some of the southern cities like Chennai (which gets, I understand, about 70% of its precipitation from this retreating, or northeast monsoon).  End of science class.]


So, how wet is the monsoon?  Here is a comparison that surprised me perhaps more than it should have.  First, take a look at the average rainfall received every month in temperate Washington DC. 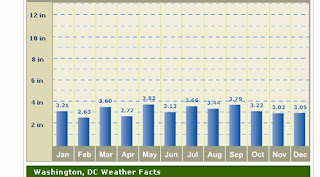 Data from weather.com
Steady as she goes, right?  2.5 to 3.5 inches of rain every month, all through the year, for an average annual rainfall of 35-40 inches.


Now compare this with Mumbai's average rainfall, with the same scale on the y-axis: 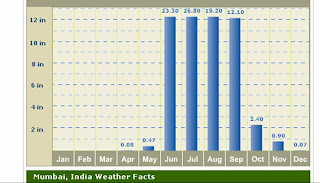 Data from weather.com
See the difference in the skyline?  It is dry as a bone for eight months of the year.  But between June and September, it pours like like no four-year old girl in Washington DC has seen.  Average annual rainfall: 85-95 inches.

As I was saying, the monsoons are monstrously wet.  When I see clogged roads and overwhelmed sewage systems in Mumbai come July, I will try and remember this chart.  The poor city is receiving, in one soggy quarter, more than twice the rain that relatively wet Washington DC receives the entire year!  Give the poor sewers a break, will you - future, frustrated me? 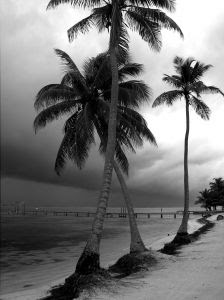 The monsoon hits the Kerala coast with dramatic suddenness and punctuality, on or around June 1 every year.  This year, the Indian Meteorological Department, with their customary bravado, have stuck their neck out and made the bold prediction that the onset of the monsoon over Kerala would occur 'around May 31'.  Whew!  That was hard work, wasn't it folks?  You can now sit back and start your sophisticated calculations for next year thank you very much.


The scenes in Kerala around this time are stunning, to state the obvious - nature resplendently blooming.  As I have been looking this up over the last few days, I have found nature pictures whose sublime beauty defies mere verbal descriptions. Look at this photo blog for some spectacular examples.  Interesting fact about the New India of course, is that entrepreneurs, bless their hearts, have found ways to make honest money around this spectacle of nature.  NatureNest is one of the companies that offers Kerala tour packages tailored for what they call "monsoon tourism".  Alappuzha, Kochi, Kumarakom, Thekkadi ...: 'watch the swaying paddy fields', 'backwater cruise on Punnamada Kayal', 'bamboo rafting in Periyar Wildlife Sanctuary' ... mouthwatering promises of natural beauty in God's own country.  Note to self: sights of India I would like to see - add to list.


So, where was I?  Ah, yes, Mr. Monsoon: Mumbai.  June.  You, me, four year old daughter.  No raincoats, no umbrellas.  Just mano a mano.  Date?
Email ThisBlogThis!Share to TwitterShare to FacebookShare to Pinterest