Historic sites - on an evolutionary scale 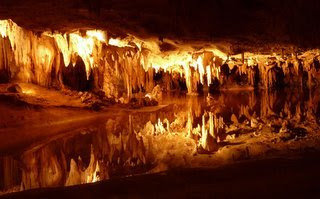 Last weekend, I took a trip with my family to Luray Caverns. The caverns, with some exquisite stalactite formations, were formed (my audio guide informed me) 145 million years ago. Driving back home from the caverns, I noticed a large brown road-sign that said - "Historic Site - Manassas National Battlefield Park". This was the site in 1861 of the first major land battle of the American Civil War. It is now a well preserved and beautiful park maintained by the National Park Service. Now, as I have probably mentioned before, I am not much of a history buff. But irony I understand. Here I was being invited to an 'historic' site about 145 years old, while on my way back from another one 145 million years old!
That got me thinking - if one were to think in terms of the history of the earth in a cosmic sense, or the history of life on earth, in an evolutionary sense, what would qualify as some of the more historic sites? So I went back to Bill Bryson's A Short History of Nearly Everything and came up with the following:
1. Shark Bay, Northwestern coast of Australia: A glimpse at the world's first ecosystem - the stromatolites. These are the first organisms to evolve after the most rudimentary bacterial life forms to emerge on earth, that starting living in a cooperative way with each other. Some stromatolite varieties live right at the surface of water, and other live just underneath, each variety being advantageous to the other. Bryson - "It is a curiously giddying moment to find yourself staring at living remnants of Earth as it was 3.5 billion years ago. As Richard Fortey has put it: 'This is truly time traveling, and if the world were attuned to its real wonders this sight would be as well-known as the pyramids of Giza.'"
2. Chicxulub Crater, Yucatan Peninsula, Mexico: A huge meteor impact crater, 180 km in diameter. One of the largest crater points in the world, though not the largest. The bragging right of Chicxulub (as opposed to Vredefort in South Africa, the largest crater site) is this: The meteor impact here occurred approximately 65 million years ago, and marks the end of the cretaceous period. Sound familiar? It should. This is often sited as the meteor hit that caused the extinction of the dinosaurs.
3. Yellowstone National Park, Wyoming: The sites of one of the largest super-volcano eruptions in the Earth's history, with expulsion of 1000 cubic kilometers of material about 640,000 years ago. Bryson ; "Most of us, when we think of volcanoes, think of the classic cone shapes of a Fuji or Kilimanjaro, which are created when erupting magma accumulates in a symmetrical mound. ... But there is a second, less celebrated type of volcano that doesn't involve mountain building. These are volcanoes so explosive that they burst open in a single mighty rupture, leaving behind a vast subsided pit, the caldera. ... Virtually the whole park [Yellowstone] - 2.2 million acres - [is] a caldera. ... Yellowstone, it turns out, is a supervolcano."
4. Burgess Shale Formation, Yoho National Park, British Columbia, Canada: One of the most celebrated fossil sites in the world. About 500 million years old, this site showcases probably the earliest view of life's history that we can really 'see' today. The fossils here show soft parts of animals unlike any other fossil site this old. And what one can see here is truly remarkable. This is a world of animals that are so different from today, scientists have trouble coming to consensus on what part of the classification tree they belong to! Bryson - "Many of the creatures employed body plans that were not simply unlike anything seen before or since, but were bizarrely different. One, Opabinia, had five eyes and a nossle-like snout with claws on the end. Another, a disc-shaped being called Peytoia, looks almost comically like a pineapple slice. A third had evidently tottered about on rows of stilt-like legs ...this had been a time of unparalleled innovation and experimentation in body designs. For about four billion years life had dawdled along without any detectable ambitions in the direction of complexity, and then suddenly, in the space of just five or ten million years, it had created all the basic body designs still in use today."
5. Olorgasailie site, Great Rift Valley, Kenya: One of the oldest and most extensive known sites of tool-making by the ancestors of humans. Between 1.2 million years and 200,000 years ago, hominids (speculated to be Homo Erectus) worked on this site to create hundreds, thousands of hand made stone weapons. Bryson - "Why the early Olorgasailie people went to such trouble we can only guess, of course. Not only did they lug hefty stones considerable distances to the lakeside, but, perhaps even more remarkably, they then organized the site. ... There were areas where axes were fashioned and others where blunt axes were brought to be re-sharpened. Olorgasailie was, in short, a kind of factory; one that stayed in business for a million years."
Now that - is a historical site!
Email ThisBlogThis!Share to TwitterShare to FacebookShare to Pinterest