Mumbai is a full bodied, five senses sort of city.  You can touch her in the crowds jostling for room on local trains, in the winding lines for Siddhivinayak on Tuesdays.  You can see her, in every vibrant color of the visible spectrum, laid out vast in glorious detergent wetness, in Dhobi Ghat.  You can smell her many scents, from the perfumed, air conditioned sophistication of glamorous malls to the base defecatory stench of Dharavi mornings.  You can taste her, in vada pavs and Irani biryanis that feeble stomachs remember with terror the next morning.  But most of all, you can hear her.

Every place has a signature sound.  An acoustic identity, if you will, an aural autograph.  From my vantage point, that sound for Mumbai is the bursting of firecrackers.

At first, I struggled to understand the 'any time any day' fireworks culture of Mumbai.  "But what is the occasion?" I would ask, barely coherent when startled awake in the middle of the night by something that climbed right up the decibel chart.  There has got to be a law against this.  What's with waking the world up because your niece got engaged, or your son has got his driver's license or mother in law left town or whatever the momentous event happens to be.

"Appa, is it Diwali?" my daughter would ask me every time.  No sweetheart, it is not.  It isn't Diwali.  And it isn't going to be Diwali tomorrow either.  But try telling the fireworks crowd that.  By the way, who are these people?  What do they have against quiet and peace?  And where is all this money for blowing up in smoke coming from?

Well turns out, there are times the fireworks crowd does go quiet.  And that speaks volumes too.

It is the quarter-final of the world cup.  The biggest match of the tournament so far.  Pre-tournament favorites India are playing three time defending champion Australia.  There is no news in the newspapers today but for this.  It doesn't matter if your paper of choice is white or pink.  It is all cricket everywhere.  Ricky Ponting has played a gem of an innings.  But this is a new India.  There is confidence in the fans on the street, and in my office.  We will make it, runs the quiet, confident refrain. But is there a hint of nervousness I hear just under the surface?  I rush home to watch the Indian innings.    (Did the guy who invented HD ever get a Nobel prize?  No?  What are the oldies in Sweden thinking?)

All windows and french doors of my 18th floor apartment are open as I pace in front of the TV, riveted by every ball being bowled.  I can't sit because things are not going India's way when I sit.  The God is still at the crease.  And every time Sachin hits a boundary, I hear a roar of approval from crowds all around our community.  I can hear sounds from miles around, and everyone in the country, at this moment, is doing the same exact thing - watching Sachin.

The fireworks gang is out in full force.  Every boundary is celebrated with a pyrotechnic blast.  The sky slowly filling up with smoke, the sounds reaching a crescendo.  And then the city goes awfully, sickly quiet.  Tendulkar is walking back on the screen, and India is still a long way from reaching its goal.  My mom is on the phone.  She is going to sleep.  Can't take the tension.  Here is the kicker though - "I will be listening for fireworks."  So there are my mom and dad, lying in bed, quiet, TVs silenced, hearts still beating, determined not to hope.  But their ears are pricked - listening for fireworks.

And what fireworks there are.  It starts slowly, tentatively, but as it gets clearer and clearer that India was going to get to the finish line, the fireworks gang get more and more confident.  The decibel level keeps increasing steadily.  Finally, when Yuvraj hits that last boundary, running down the pitch like a man crazed, hugging Raina in a deathly embrace, the skies in Mumbai lit up again.  The tentativeness is forgotten, the city speaks in booms.  The joy of a people lights the skies up spectacularly.

"Do you still watch cricket?" was a question every acquaintance would ask on my return to India.  Truth is, I did not.  Watching from across the seas, in the silence of my basement, over a rickety internet site, never really got my juices going.  I will try to get back into it slowly now that I am here, I had told myself.

"BOOM!" goes another of the massive rockets.  It is official now.  I am back to being a fan.

It is the 30th of March, a day before the financial year end.  A day that is going to be really busy at work.  The entire country wakes up with butterflies in the stomach, and it has nothing to do with the year end.  India play Pakistan today in the semi-finals.  It is a match-up to beat all match-ups.  A no-holds-barred street fight.  At half past noon, my blackberry buzzes.  It is a text from my mom - "Match starts in 1.5 hrs.  God bless India".  Yeah ... no one is really going to be working much today.

We have set up a large screen and a projector at work.  The crowd has started to get together well before the first ball is bowled.  The boss and I try to hold a quick meeting while the match is still in its early stages.  But every few minutes, we can hear the crowd outside cheering, whoops and yells pierce the walls of the meeting room.  Our eyes meet.  "I don't think this is working", my boss says, "Let us just do this another day."

BOOOM!!  Go the fireworks later that evening, when the first Pakistani wicket falls in the chase for, strangely enough, the exact score that India had chased down just a few days back.  And the BOOMs keep coming.  Numbers two, three, four ... When the last man holes out, I run from my TV screen at home to the window.  I don't want to miss a second of it.  It is ecstasy.  An outpouring of emotion unlike any I remember seeing in recent years.  The skies are alight.  The noise is deafening.  India are through to the finals!  (And Pakistan is going home.)

We decide to watch the finals with my parents.  At least my mom will save on texting costs.

Say an alien were to visit India today.  Someone who knows nothing of the country, and certainly nothing of the game of cricket.  If this alien were to perch atop its spaceship roof, balanced precariously on the dome, listening to the sounds of the city, here is what it might hear -

BOOM.  BOOM.  [Some early bowling success for India]
Silence.  Long, multi-hour silence.  [Sri Lanka consolidates slowly but surely]
A collective gasp, an extended groan.  [Mahela cuts loose in the closing overs]
Horns blaring, screeching of brakes, more horns.  [Traffic comes back to life between the innings]
GASP!! [Things do not start well for India.  Not by a long distance.]

And then things go really quiet.

The city, the country, waits.

The skies are silent, forlorn.  India is getting closer in the chase, but no one is getting the fireworks out yet.  Not wanting to tempt fate.  Afraid of being the jinx that brakes the slowly emerging spell.

All is silent, and we wait.

And then the moment arrives.  Kulasekara, steaming in to bowl to Captain Courageous.  Puts it in the spot, and the artist formerly of long locks, breaks every shackle, lets the monster shot loose.  The ball sails over the boundary, the bat is swirled one final time for effect, and the deed is done. 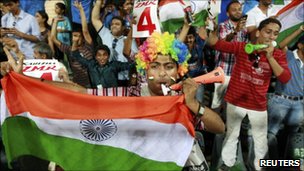 YEAHHHHHHH! Comes a massive, collective yell from downstairs.  And the skies - they finally, finally burst open.

The fireworks continue through the night.  Smoke is everywhere.  People are running out of their homes, waving India flags, hugging everyone in sight.  Youngsters are shouting slogans.  It is unlike anything the sleepy daughter has ever seen in her young life.  We won, she knows, her grandma told her.

"Appa, is it Diwali?" she asks me, playing our old game.  No sweetheart, it is not Diwali.  It is bigger.  Much, much bigger.
Email ThisBlogThis!Share to TwitterShare to FacebookShare to Pinterest