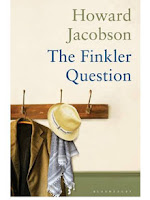 Philip Roth must be a tall man.  So tall in fact that his literary shadow seems to fall on every Jewish author in the world.  Even one that lives across the Atlantic.  If you are a Jewish writer of fiction in this era, I don't know how you escape the Roth comparison.  It isn't original for the reviewer to do so, but then, who wouldn't?

Howard Jacobson is the London answer to Roth.  Before The Finkler Question, I don't think I have read what can only be called 'Jewish fiction' from Britain.  I also don't believe I have read a Booker Prize winning book that I haven't liked.

Back from the early nineties, Booker prize winners have been a very safe bet with me.  I have inevitably liked them.  Back from the English Patient in 1992; through Paddy Clarke Ha Ha Ha (my first, and favorite Roddy Doyle); Amsterdam (my first but not favorite Ian McEwan); Disgrace (Coetzee's great, small book, which I finally read last year); Life of Pi; The Inheritance of Loss (again not my favorite Kiran Desai, but a great book nonetheless); The White Tiger (how unforgettable was Aravind Adiga's Balram Halwai?).  Through the years, the Booker has been a great source for me.  And of course, there was the greatest of them all - Midnight's Children, the best Rushdie, which is saying something.

Some of these authors I have turned out to be disappointing with their second books, discouraging me from ever reading them again - Aravind Adiga and Yann Martel come to mind.  But the winning book has almost always satisfied.

The same can't be said about Nobel prize winners.  I realize that the Nobel is offered to a body of work, to an author, not to a particular book, so the comparison is not a fair one.  But Nobel prize winning authors haven't always been a big hit with me - accessibility of their books being an important obstacle in some cases.

Anyway, back to the review, till a few weeks back, I hadn't read a Jewish book by a British author.  And I hadn't disliked a Booker prize winner.  Unfortunately, both these facts changed with Howard Jacobson's The Finkler Question.

The Finkler Question is the story of three men - "two widowers and (Julian) Treslove, who counted as an honorary third".  Two of them (writer philosopher Sam Finkler and long retired teacher Libor Sevcik) are Jews, and Treslove, who isn't one, would like to be one.  Think of it as Dil Chahta Hai, thirty years and a couple of spousal deaths later, with a Jewish tilt.  I say it is 'the story of three men', but really, it is more like the ruminations of three men, and the women in their lives, past and (infrequently) the present.

I had posted a while back (Honey, I shrunk the Plot, Aug 2009) about the evolution of the modern novel to a place where the plot has become somewhat unfashionable.  I don't always mind that (The Elegance of the Hedgehog for instance).  But sometimes, the introspective passages of a novel get a bit tired.  And that is what happens with The Finkler Question.

There are, to be honest, some crackling sentences and paragraphs in the book.  Breathtaking prose written by someone who has his hand right on the pulse.  For instance, introducing the melancholy Mr. Traslove, Jacobson writes -


'Cheer up,' people would say to him in the canteen.  But all that did was make him want to cry.  Such a sad expression, 'Cheer up'.  Not only did it concede the improbability that he ever would cheer up, it accepted that there could be nothing much to cheer up for if cheering up was all there was to look forward to.

Or this, with the men thinking about their lost wives (not the overly sentimental Erich Segal-ish first bit - that is what you need to get through to get to the delightful line at the end) -


How do you go on living knowing that you will never again - not ever, ever - see the person you have loved?  How do you survive a single hour, a single minute, a single second of that knowledge?  How do you hold yourself together?

He wanted to ask Libor that.  'How did you get through the first night of being alone, Libor?  Did you sleep?  Have you slept since?  Or is sleep all that's left to you?'

But he couldn't.  Perhaps he didn't want to hear the answer.

Though once Libor did say, 'Just when you think you've overcome the grief, you realise you are left with the loneliness.'

So, there are the ingredients for a great story - good characters, a very skilled writer.  But then start the explorations of Jewishness.  Which are fine, for the first fifty pages or so.  Going back to Roth though, one gets the feeling that this has been done, and better, by the master many times over.

By choosing old men as the protagonists, Jacobson is able to place some vigorously politically sensitive statements in the mouth of his characters.  It is the sort of allowance one would give old men that the reader doesn't cringe reading some of these.

And another thing - Jacobson keeps things light all along.  The Finkler Question is quite exquisitely funny in parts - a funny take on Jews and their relationship to the world - so kill me for seeing a Roth connection.

A character, whose upcoming Jewish culture museum has been desecrated by people who have 'wrapped rashers of bacon around the handles' of the door -


'It isn't just their overestimation of our horror of the pig,' she said, wiping her eyes.  'I'm sure, for example, they don't know how much I love a bacon sandwich, but it isn't only that, it's their exaggeration of our presence.  They find us before we find ourselves.  Nowhere is safe from them because they think nowhere is safe from us.'

Ultimately though, it is a sentence from early in the book that describes things best for me -

'All Jews.  Endlessly falling out in public about how Jewish to be, whether they are or they aren't, whether they're practicing or they're not, whether to wear fringes or eat bacon, whether they feel safe here or precarious, whether the world hates them or it doesn't, the fucking Holocaust, fucking Palestine ...'

I wouldn't say I am sick of it, exactly.  That feels a bit harsh.  But I did feel a bit tired by the end.
Email ThisBlogThis!Share to TwitterShare to FacebookShare to Pinterest