The surprising charms of Mumbai

Mumbai is one of the most crowded cities in the world.  It is also, though I am not aware of any statistics, likely among the noisiest cities in the world.  If the number of cranes I can see on its horizon are any indication, it is fast getting to be among the most concretized cities in the world.  Nature, I have often surmised, has been beaten into submission by the megapolis.  Pushed into a corner, brushed rudely away by the swarming masses.  So when a friend mentioned that he was a member of the Bombay Natural History Society (BNHS), I couldn't quite contain the snigger.  And what does the Society do, I wise-cracked, water the four trees in Dadar?

Well, turns out, there's a lot about this city I don't quite know.  Many charms Mumbai has been keeping from me.

It is a weekend evening and we are driving with our bird-watcher friend towards the Eastern shore of Mumbai, to pay a visit to the Sewri mudflats.  These are mangrove swamps, declared a protected ecology by the government some years back.  Every years, between the months of October and March, the area is the destination of a particular migratory bird species.  We are headed, not to put too a fine point on it, towards Flamingo Bay.

The Sewri mudflats have marshes that are extremely nutrient rich.  So every winter for the last few decades, thousands of Lesser Flamingos descend here to peck at the mud, hang out with friends, enjoy the Bombay skyline, and generally have a good time.  For the last few years, this has started to become something of a tourist event.  We head there on a day BNHS has declared the Flamingo Festival.  I am still half disbelieving - Flamingos in the wild?  In their thousands?  In the middle of traffic snarled, over-crowded, cramped for elbow room Mumbai?  Puh-leese.   About two kilometers from the mudflats, we start seeing the BNHS volunteers, in their blue T-Shirts saying "Save me", with the Flamingo neck making for the shapely 'S'.  The crowds are surprisingly strong ... Hmm... either this is an elaborate hoax or there really are a lot of birds.  We walk to the edge of the jetty and stare out towards the water.  It is low tide, and the mud stretches for a distance before being kissed by water.  And spread all over it, is a carpet of baby pink.  Necks down, pecking the mud with love, are thousands upon thousands of flamingos.  Guests in my city.  Like they are college girls, and this is Fort Lauderdale in Spring Break.  Like they are camera toting tourists, and this is Yellowstone in June.  Like they are Bihari laborers looking for work, and this is ... well, Mumbai. 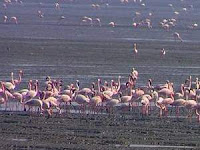 We stay there an hour, staring at the birds as they go about their business unhurriedly.  BNHS has set up a tent with a lot of information on the flamingos, both the "Greater" and the "Lesser" variety.  And they have volunteers in the 'Save Me' T-shirts everywhere, ready with information, happy to lend their binoculars.

It is my first brush with nature in Mumbai since my return, and it makes me see her in a new light.

The sister in law in visiting and is keen on a trip to the beach.  Really?  I ask her.  You want to brave the beach in Mumbai?  It is going to be a dirty, trash ridden mess, and overrun with people to boot.  You are too negative, she tells me, a Mumbaikar at heart, two decades outside the city regardless.  We get there early in the morning, and by the time we park our car and start walking towards the sand, I already know something is different.  I can actually see all the way to the water.  Which means .... "Where are the hawker stands" I ask no one in particular.  The beach is mostly empty, and - here is the part that shocks me - clean.  We get comfortable on our beach towels, watching the local lads playing a free-for-all version of beach cricket.  The sun is still comfortably low on the horizon, the waves are crashing ashore with soothing regularity, the kids are busy building sand castles, the scattered palm trees are swaying in the morning breeze, the boys scream 'catch! catch!' every so often, and then break out in laughter as the catcher trips and falls right into the sea.  "You know I quite forgot" I tell the wife an hour later, "we are still in Bombay".

How about a visit to Sanjay Gandhi National Park, asks the bird watcher friend some weeks later.  'Sanjay Gandhi' national park?  What is their logo, a pair of scissors going snip snip?  I fall back into my defensive humor.  Hey, it is a really good park, says the friend, defending her city from the barbs of someone who is still an outsider.  I look it up.  Well, I realize it is a pretty big deal.  Sanjay Gandhi National Park is spread over approximately 25,700 acres, making it the largest urban park in the world.  For comparison, Central Park in New York is about 850 acres.  Hyde park in London is about 625 acres.  The park is home to hundreds of species of birds and animals and an even larger number of plants.

We reach there early one weekend morning.  The plan is to pay a quick visit to Kanheri Caves located within the park, and then spend some time exploring the greenery.  I realize as soon as we get there that the plan is too ambitious.  The park is too darn big to explore in a day.  And the Kanheri Caves are too interesting to just gloss over. 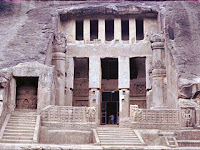 Kanheri caves are Buddhist caves dating from as far back as 1st Century BC to the 'newest' caves that are from the 10th century.  These caves are half monument, half practical abodes.  There are about 110 caves in all, and they take some serious climbing to visit.  This area has a lot of these caves from many centuries back, but I haven't visited any of them.  I haven't been to Ajanta / Ellora or even to the much more accessible Elephanta Caves.  Maybe that is why I am awed by the caves here.  Tens of caves have been cut into sheer hard rock.  Steps have been cut in the hundreds to make these caves accessible.  And in the caves are these glorious reliefs of Buddha in his many poses.

We climb down tired and hungry.  Our bird watcher friend has come prepared with a picnic breakfast.  But first, she suggests, let's get some cucumber.  The vendors have placed themselves at the point of greatest thirst - right at the bottom of the stairs.  We fall on them with gratitude, crunching into the juicy greenness of cucumbers greedily.  Be careful, one of the vendor women says, seeing us walking under a tree.  I look at her uncomprehendingly, and she indicates heavenwards with a lifted eyebrow.  Monkeys.

There is an email in my mailbox from BNHS.  A list of events they are organizing in the months of May and June.  Yeoor Hills, says one.  Silonda Nature Trail.  Tungareshwar Wildlife Sanctuary Monsoon Trail.  I haven't heard of any of these places.  But then, who am I to claim to know Mumbai's natural charms?  I trust you Bombay Natural History Society.  Lead me on.
Email ThisBlogThis!Share to TwitterShare to FacebookShare to Pinterest