The politics of the clothesline

Never thought I would witness this.  I mean, India is a land of contradictory realities and all that, but somehow, witnessing such an exchange never struck me as a possibility.

The centrally located, relatively new and decidedly yuppie residential complex in Mumbai that houses me, has a residents' Google list.  (And, I am certain, a Facebook page, some twitter ID, and whatever else is the yuppie thing to do nowadays)  On this Google list, there is a constant stream of emails from people listing their views on the community, issues of common interest, 'help wanted' ads for maids and drivers, and what have you.  All nice and neighbourly.  A recent email caught my attention.  Judging by the immediate burst of hubbub it created, I wasn't alone.

"I think it shouldn't be allowed," declared the writer, "for residents to dry their laundry on an external clothesline." 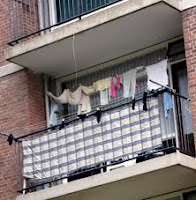 Now, if you have seen, passed by, lived in, any residential community anywhere in India, you know this much for a fact.  The clothesline is a birth-right.  We are the people the have hung our dirty laundry in public for all recorded history.  We are the people that crane their necks out of freshly rented apartments, trying to look for the tell-tale nails and hooks the previous occupant might have left behind.  We have a special kind of nylon rope that was invented for the sole purpose of becoming a clothesline.  I am pretty sure we invented that weird 'three poles triangulating' sort of arrangement that supports clotheslines in open areas.  We are, in short, clothesline people.  "I think it shouldn't be allowed for residents to dry their laundry on an external clothesline"??  Gasp!

Turns out a lot of people agreed.

I am not the most observant of people, so maybe I had missed something all these days.  The next morning, I took a walk around, and looked up at all the balconies in our complex.  Sure enough, no clotheslines.  Except for the offending few that had so aggrieved our emailer.  I can see a blue towel fluttering away from the fifth floor.  A few ... let's say 'delicates' whose colors are indeterminate high up on the eighth floor.  Oh, and one of the offenders, blithely oblivious to the heated chatter about them and their ilk, has a brown bed-sheet hanging out there, in all its yellow floral glory.  Sweet!  But strip those out, and there isn't any other line in sight.  Hmm ...

There are two primary arguments for the 'No Clothesline' movement.  One is purely aesthetic.  'When I sit out on my balcony, I don't want to be staring at your well worn socks' so to speak.  Fair enough.  And the other argument, derived from the same, but one step removed, is economic.  Properties in clothesline strewn buildings lose value, goes this argument.  Clotheslines are for the tacky, the middle class, the old.  Add them anywhere near my apartment, and you are reducing my sale price.  I tried searching for some research that might establish this causal relationship, but no luck.

Electric clothes dryers have been around in the developed world since the 1940s.  By the late 50s and the 60s, they started to be really popular.  It started off, if I understand it right, as a symbol of affluence. 'I am successful, you can't see my underwear any more', in a manner of speaking.  Slowly, like with most household gadgets in the west, they became ubiquitous, and communities could scarcely recall a time when things had been different.  There were still the pesky few who might put their laundry out to dry.  But by now, every community had their own regulations barring such behaviour.

In India, needless to say, communities have had much bigger problems than the impact of sun-drying clothes on real estate prices.  Dryers were practically unknown and largely unavailable.  Electricity was expensive.  There wasn't much of a sense of personal space anyway, so the neighbour's clothesline blended right in to your life.  So the dear clothesline lived on.  Until now, it appears.

The average electric clothes dryer consumes energy at the rate of 4,000 Watts.  Yes, there is no decimal error here.  You read it right the first time.  It is probably the most energy guzzling domestic appliance invented by man, with the possible exception of central air-conditioning.  How much is 4,000 Watts?  Well, let us say you hang the clothes you want to dry on one of those standing clothes racks, place the rack in a room, and turn on a ceiling fan to dry things out ...  You can come back three days later, pick up your clothes and walk out of the room feeling all green, because you still saved some energy by not putting the clothes into a dryer.

"Why would I use the dryer?" my wife asks me, when the email debate comes up.  "It over-dries my clothes, fades out the colours, and is too expensive.  And all the while, I have this bright sun burning its energy out on my balcony, begging to be put to some use.  What a waste!"  That's true, I grant her, but there is something to the idea of not having to look at other people's laundry.  Call me a snob.

"I think everyone should be allowed to decide for themselves", someone bravely pipes in on the Google list finally.  "After all, this is India."  Attaboy!

It is early in the morning, and I am walking my daughter to her school bus.  We are walking past the building that started off the fiery debate.  I look up.  An old lady, sari all crumpled from a night's sleep is out on the balcony.  She is moving slowly, her hands are full, and she is straining with the effort.  Slowly, she is pulling off her clothesline the brown bedsheet, with its yellow floral print.  She pulls it all the way off, and concentrating hard, flips it over, hangs it back out.  She fastens it in place with a couple of clips, straightens her back slowly, takes in the view outside, turns, and trudges slowly back inside, ready to start the rest of her day.

For a moment there, she looked like my mother.
Email ThisBlogThis!Share to TwitterShare to FacebookShare to Pinterest